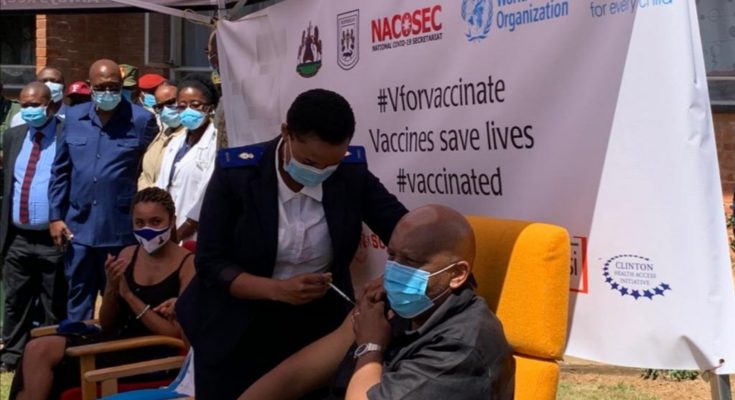 Development for Peace Education (DPE) and the Ministry of Health, participated in a programme meant to support public education on the Covid 19 vaccine on Peoples’ Choice morning programme, Thahameso. The focus of the education programme was to respond to a rising skepticism against the AstraZeneca vaccine since South Africa halted its roll-out of the same vaccine on the grounds that it was not effective enough against the strain of Covid 19 found in South Africa.

Many people believe that Lesotho has the same strain of the Covid 19 that has been found in South Africa. However, the representative of the Ministry of Health, explained that there is no scientific evidence that Lesotho is fighting the same virus variant as South Africa and affirm that AstraZeneca is safe for Basotho. The Ministry of Health reports that it has sent a sample of tests from people who tested positive for COVID-19 to a laboratory in South Africa two weeks ago with the hope of discovering the COVID-19 variant that is in Lesotho. The ministry stated that it is only after obtaining results from South Africa that they can know the state of COVID-19 variants in Lesotho and take necessary precautions.

While it would have been more desirable that the Ministry of Health had the tests back and information to confirm that the country does not have the Variant B.1.351 of the Covid 19 that is found in South Africa against which the AstraZeneca vaccine has proven to be less protective, DPE continues to encourage Basotho to participate in the vaccine roll-out and pay attention to public health information campaigns meant to give them the necessary information about the roll-out of the vaccine and other measures of continued protection. The roll-out of the vaccine in Lesotho will begin in the second week of March and already 36,000 vials of the AstraZeneca vaccine have already been delivered as only a part of the expected 1.6 million vaccines to be used by the country.

When listeners were given an opportunity, during the Thahameso radio programme, to ask the representative of the Ministry of Health questions, nine people called-in and said they were not satisfied that the AstraZeneca vaccine will provide the right level of protection as they believed Lesotho also has the variant of the virus that has been found in South Africa. One listener said that the Ministry of Health has not provided enough public information to overcome some vaccine skepticism and specifically to prove that the AstraZeneca vaccine is the right choice for Lesotho.