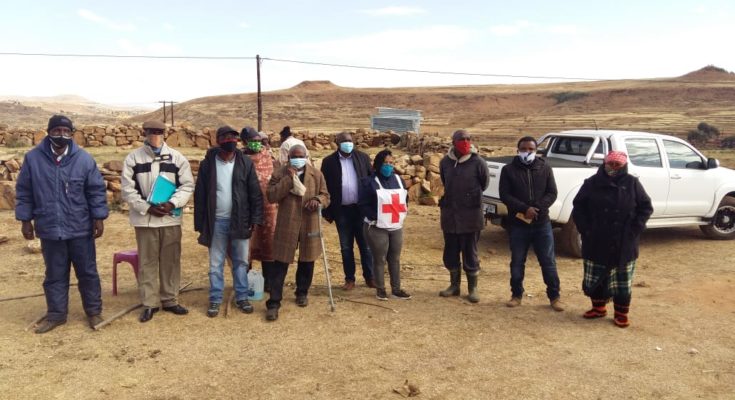 Development for Peace Education (DPE) in collaboration with Survivors of Lesotho Dams (SOLD) and Red Cross Lesotho held a one day gathering for the Ha Monamoleli community in Metolong area. The meeting was attended by members of the community, the area’s chief and councilors. The gathering was called to inform the community about corona virus and how to avoid spreading the infection.

The participatory community session covered issues of transmission and spread of the virus, proper use of Personal Protective Equipment (PPE), use of domestic materials available at community disposal to make personal protective equipment. 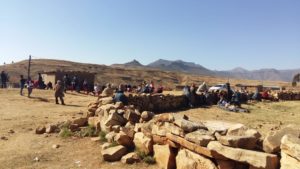 The DPE delegation, made-up of two (2) Peace Education Researchers and the organisation’s Coordinator took the attendants through proper and safe way to putting on facemasks. It was demonstrated to the community with the demonstrator holding the mask by its laces and putting it on safely then taking it off by removing the lace from one ear and procced to the second ear. The community was advised not to touch the front part of the mask as that is the place where the virus from the second person resides after being in proximity with an infected person.

The community was taught that the reason people are encouraged to wash hands with soap and running water or with hand sanitizer is to ensure prevention of possible infection should the person’s hand mistakenly touch the mask or an infected surface or person. Washing of hands regularly eliminates chances of infection by killing the virus from the hands.

Since the global transmission of the corona virus started in 2019, rural and destitute communities in Lesotho have been living in fear of its transmission because of lack of education and information on the virus.  Source of information for these communities has been third party information passed from those who own a radio or television set or have access to social media platforms or have travelled to nearby towns of Maseru or Teyateyaneng and come with some information from the cities.

A lot of questions were raised by the attendants as a result of the education session, particularly on restriction of 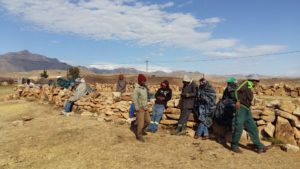 movement, limits on the number of people in a gathering and social distancing in public places. The DPE delegation enlightened the community that movement restriction otherwise popularly known as Lock-Down is done in incidents of state of emergencies to control and contain possible threat of wide-spread infections of contaminant viruses. The delegation continued to inform the community that a restriction of 50 people attending a funeral service is to minimize possibility of infection and to make social distancing achievable by avoiding possible physical contact that usually happens in crowded places.

A major worry for this community however has always been unavailability of materials to make and use for personal protection.  DPE with assistance from Red Cross Lesotho erected a tippy-tap at the area’s chief office premises. The officers exhibited to the community how to erect a tippy-tap using domestically available resources. A tippy-tap  is a  hands free way to wash hands. It is highly recommended for rural areas and place where water is scarce. It is operated by a foot lever so it eliminates chances of virus transmission.

According to the community, since the outbreak of corona, there has never been a time that they were visited by health officials or other officials to inform them about the virus and educate them on precautionary measures to 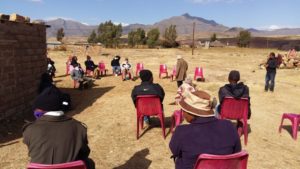 take to avoid transmission of the virus, before Lesotho was hit.

The community thanked DPE and its partners for the visit. Members of the community expressed appreciation for the awakening information given to them. They said that now they understand the importance of washing hands regularly with soap and running water and appreciate why they must always wear masks in public places as well as the necessity of a lock-down.

The community also expressed its gratitude for the tippy-tap hands wash facility erected at the premises of the area chief’s offices. They were grateful to the three organisations for capacitating them with skills on how to erect tippy-taps at their homes