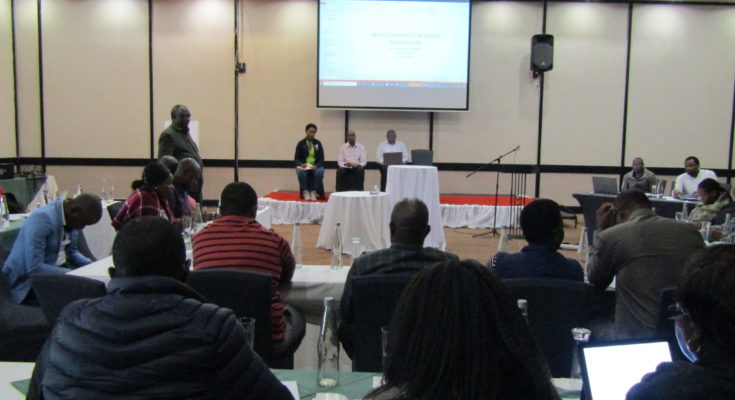 Development for Peace Education (DPE) was represented in training organised by the SADCOPAC secretariat in collaboration with Public Accounts Committee (PAC) Lesotho, which was held in Maseru on Friday the 13th March. The purpose of the meeting was to build capacity of members of SADC oversight committees in auditing extractive industries; tax policy and illicit financial flows; performance auditing and public financial management and their appreciation of the role of civil society and the media in their work. DPE was invited as one of the national organisations working closely with the parliament portfolio committees and especially the Public Accounts to share experience working with the Public Accounts Committee. 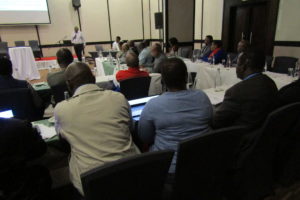 The Coordinator of DPE Mr. Sofonea Shale made a presentation on Utilising the Media and Civil Society Organisations (CSOs) to enhance public accountability and transparency on natural resources. The presentation covered among others the fact that the executive is born out of parliament thus making it difficult for Members of Parliament to hold the executive accountable.  He went on to share with the attendants the fact that often Members of Parliament follow the party line on issues instead of acting independently. He also talked about Members of Parliament essentially acting as members of cabinet in waiting. Shale further highlighted the fact that the institutions that are supposed to hold government accountable are generally weak in performing their mandate.

In his interactive presentation he asked honourable members about their interaction with civil society organisations and their engagement with them on citizen participation.  He said that civil society organisations complement government efforts to curb corruption and hold those who misuse public funds accountable. Additionally he said that there are some approaches that organisations use to inform public debates on budget performance appraisal that take both committees and ministries to account on budget performance and allocation of funds. He stated that unlike other organisations which stand afar and start criticising policy makers; as an advocacy organisation DPE believes in constructive engagement with policy makers. He stated that the local  media is highly polarised  thus the need for DPE and similar organisations to play a major role to set tone for media on radio and other communications platforms, including social media.

Other than this he shared with the honourable members that DPE is at a stage where it is drafting an MoU to allow for formal cooperation with the PAC, the police, Office of the Auditor General, Ombudsman, Director of Public Prosecutions, Directorate on Corruption and Economic Offences in addressing citizens’ concerns on implementation of recommendations and findings from the Auditor General and the Public Accounts Committee.

The honourable members had their comments on the relationship of CSOs with parliament and the kind of support they provide to portfolio committees which of course were raised by the presentation.