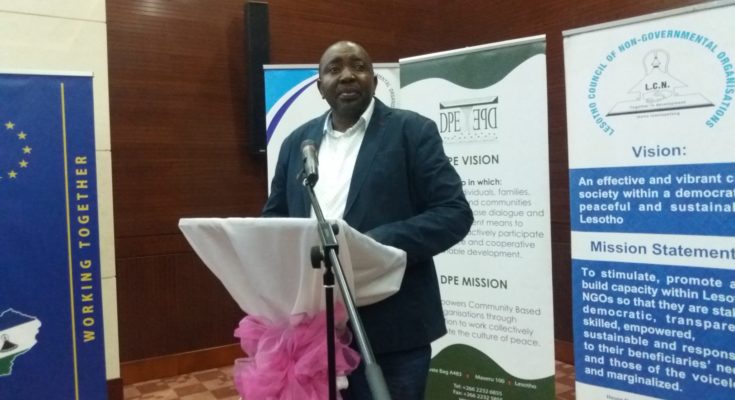 This occurred at the Lesotho Council of NGOs annually hosted  NGO Week(now 19th ) a platform where CSO collaboratively discuss key problems and find possible solutions to inform the national development in different areas. On Wednesday, 12thDecember 2018 DPE and LCN held a joint evening dialogue session testing varying opinions from different sectors on how reforms process should be safeguarded.

The DPE Coordinator Mr. Sofonea Shale indicated that civil society is concerned that the gains made are likely to be lost if there is no clear way throughwhich the processes would be safeguarded beyond plenary II.
Embracing progress made, safeguarding and shepharding the process
Proposed reform structure NDPC.
He said that there are two potential dangers this process faces namely (i) potential for government to use incumbency to unduly influence the reforms outcome and (ii) potential for opposition to stall the finality by trading off the two thirds majority necessary to change the constitution for traditional opposition political demands. In order to address this, Shale said that civil society would like to see Basotho using the effectiveness and availability of Dr Dikgang Moseneke standing in for SADC Facilitator an opportunity that may not last for ever.Shale proposed that there be an all-encompassing structure to be legislated and that all clauses of the constitution should be subjected to public scrutiny and the constitution should stand as it would have been decided by the Basotho after referendum and other processes of reforms as would been decided.

Despite focused debate some stakeholders especially political parties felt that NGOs should not move at the speed that others may not cope with.      It was agreed that this session must be taken as ground breaking and it should betaken as initial stage to be followed by others that are consultative and inclusive. Electoral Reforms was given as a motivation that consultations contemplated by the road map should be taken beyond geographic coverage to sectors.

The session was attended by Hon Minister of Law, Human Rights and Constitutional Affairs Hon. Development Partners EU, SA Commission, Political Parties(opposition, parties outside government and the parties in government),academia, CSOs, media and Members of Parliament, National Dialogue Planning Committee, IEC and other eminent people. The opposition leader Hon. Mathibeli Mokhothu agreed with the proposal and further stated the importance of dialogue sessions with the government on the reforms.