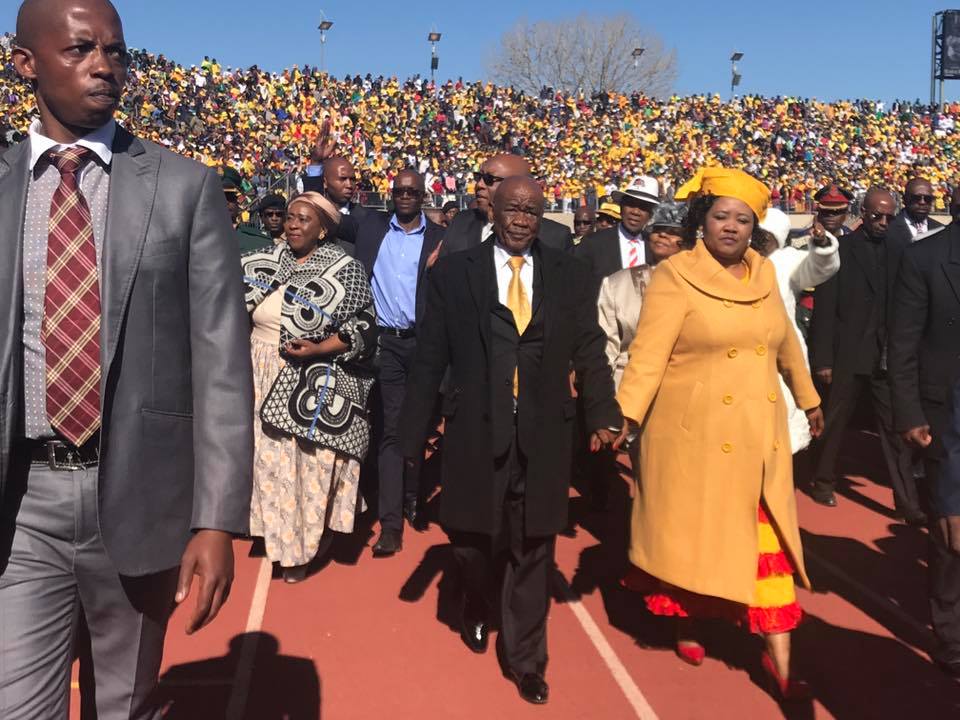 The mid June inauguration celebration marking official end of term for Dr Pakalitha Mosisili’s administration and beginning of Dr. Motsoahae Thomas Thabane’s regime will be remembered much more for what was seen than heard

This inauguration followed the sitting of Council of State which in terms of section 87(2) of the Lesotho constitution advised the King that Dr Thabane appears to the council to be a leader of a party or coalition thereof which will command majority of members of the National Assembly. This occurs only few days ’M’e Lipolelo Thabane, the estranged wife of Right Honourable Thabane was shot dead at Ha ‘Masana about 18 kilometres South of Maseru capital by unknown assailants.  Though ‘M’e Lebohang Ramohlanka, Government Secretary and director of ceremonies invited the multitudes to observe a moment of silence for the passing on of ‘M’e Lipolelo and that in his inaugural speech the Prime Minister bemoaned his 20 years spouse and appealed to the law enforcement agencies to apprehend and bring killers to justice, some Basotho were not consoled, they thought it could have been better to postpone the swearing in and transfer of reins of power.  For these people the moment of silence and the words of PM went unnoticed. The distraction by the crowd when Bishop Mallane Taaso the Anglican Church Bishop also part of the Heads of Churches of Lesotho mounted podium to read the holy scriptures from the sermon on the mountain was so visible and deafening that only few heard the reading Conspicuous also at the Setsoto National Stadium on the day was a tractor pulling broken pot put on the pseudo coffin wearing colors of the congress alignment on a trailer drooling around the track field. 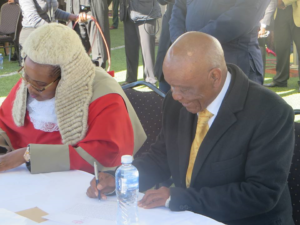 Thabane took oath in front of chief Justice Nthomeng Majara in the presence of Their Majesties, President Lungu of Zambia, Deputy President of South Africa and SADC Facilitator to Lesotho, Prime Minister of Swaziland, judges of the High Court of Lesotho, Members of Diplomatic Cops, Members of Mosisili’s cabinet, Members of Parliament, officials and members of the public predominantly ABC, BNP, AD and RCL supporters. Dr. Pakalitha Mosisili handed over the reins of power, shook hands with Dr Thabane with widest smiles on their faces communicating mutual respect and reciprocal well-wishing. Unlike other times, the outgoing did not deliver a congratulatory speech a gesture received with mixed feelings. Some of the people whose views were captured saw this as an arrogance of the outgoing Prime Minister who appears as though he does not owe anyone yet to others this meant a well calculated move to save himself potential distraction Bishop Taaso experienced.

These things are mainly what people raise, reflect upon and talk about in relation to the inauguration. The strong commentary on the scriptures made by Reverend Tšeliso Masemene of Heads of churches who is also the Lesotho Evangelical Church in Southern Africa Head of Synod is hardly mentioned.  He urged Basotho to unite and called upon them to stop rampant killings that have turned Lesotho into a blood bath. He appealed to the new government to work hard to take control. The similarity of this appeal with the words of incoming Prime Minister urging law enforcement agencies to apprehend killers of ‘M’e Lipolelo and those of other Basotho skipped attention of many. This should be an instruction to those who will be assigned responsibility in the new government to redouble efforts to fight crime. Without doubt Lesotho is a democracy at crossroads, this President Lungu confirmed by indicating that democracy is an expensive encounter but Basotho should find ways of making it cheaper. Another missed and hardly mentioned episode is the message delivered by the Swaziland Prime Minister Barnabas Sibusiso Dlamini on behalf of SADC chair His Excellency King Mswati III.He said that international delegations congratulated Thabane but hastened to communicate message of SADC chair that Lesotho should implement reforms. He urged all stakeholders to support the new government. 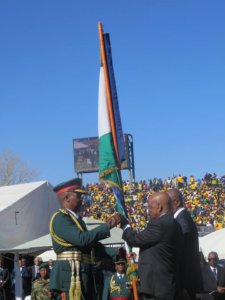 Thabane promised that his government will fight poverty, take crime head on, collaborate with civil society and prioritise reforms. Though Thabane was determined to bring change, he confessed that expectations are quite high. His emphasis that security agencies are accountable to the elected civilian authority carried more weight than any single issue he touched. Had these issues been heard and informed post inauguration deliberations they would put incoming government under adequate pressure to deliver on the promises. In fact all Ministers that His Majesty acting upon advice of Thabane will appoint are expected to translateThabane’s speech into action. This would be beginning of the work for opposition, civil society, church, media, development partners and every Mosotho interested in the development of Lesotho.

But it would seem that the inauguration will be remembered more for what was seen than heard.  Instead of  engaging on these issues and giving people hope that what Prime minister must be held accountable to what he promised, the media and indeed political parties which failed to retain government power pick and choose the detractors and make issue out of them. Added to the equation is the accusation that civil society has not uttered a word when Bishop Taaso was distracted, has not talked about the death of ‘M’eLipolelo, kept quiet about the tractor pulling broken put and artificial coffin bearing colors aligned to the congress assortment on a trailer. This in the view of promoters of this public perception defines civil society as losing its potency as non-partisan actor. Though under the generality of the principle of non-interference in normal politicking, this would not be attended to, it was felt at DPE that it would be worth it to raise some issue perhaps with a view of provoking some discussions around this.

Civil society organisations particularly those working on governance, human rights and advocacy do not seek to replace political parties or micro manage them. The organisations are concerned about the extent to which political engagement and exchange is played within the framework of law and the purview of political stability. It is not the intention of these organisations to comment on each and every aspect of social, political or even economic life. So it may not be proper for any politician who has something to comment on to believe that simply because he/she finds reason to pick it up, civil society should make public pronouncement about it.

Ironically, politicians who want civil society to speak out are the ones who did not consider its contribution, who attacked it not only for what it said but even fabricating stories so that they could find comfort is attacking the sector. Despite the explicit declaration of intent in the 2nd Coalition Government Agreement in C 13 that efforts would be made to work with civil society, the sector was demonised not only by the same politicians but even their supposedly learnt aides instead of engaging. Could it be true that civil society commentary on these matters was genuinely expected or was it wanted to make it easy for them to be attacked? The same politicians, who parade themselves as protectors of Christian Council of Lesotho today and want public to see civil society as partisan for not saying a word in support of the Christian Council, are on record in the pre-election period labeling both civil society and the church as politicians masquerading as electoral educators. They have even taught and encouraged public to chase these educators away from their households and villages. Could it be a wild curiosity if one asks whether this distraction of Bishop Taaso was not a maturation of that unfortunate political sermon? Several attacks  against the Christian Council of Lesotho, the Lesotho Catholic Bishops Conference in particular the Archbishop of Maseru, sisters of different congregations within Catholic Church have been leveled in the media consistently by seemingly highly esteemed members of political parties of the same feather before elections. Demonstrating concern over what the public did to Bishop Taaso is an act of fellowship but condemnation in the strongest possible terms as witnessed begs a question, what a sudden change of heart? May be a question can be added, is this not your teaching?

At DPE the general feeling is that Basotho need post-election dialogue which shall melt frozen political interaction not only between but also among political parties, churches, organisations, parliament, security agencies, etc.

On the other point, Basotho may need to engage one another on whether the inauguration should remain a wider public event or be restricted to the palace garden as it was before. In the deliberations about the inauguration Basotho must decide whether this is a continuation of pre-election star rallies combined or a closure of canvassing chapter where Basotho should appear as national and united front. This engagement shall inform not only the attire, choice of songs, utterances and things to bring for public exhibition but also the mood and finally the conduct.

For leaders, never instruct your supporters to disrespect other people, if you do one day they will do it to you. When your supporters to a bad thing, speak against it, that instills a sense of norm. For whatever reason, it is an unacceptable behaviour for young people to disrespect adults either over the radio, in the public rallies or at an inauguration! Do not instruct youth to do it, if they do stop them. Shortly after 1993 elections, the Principal Chief of Matsieng was attacked by herders in Boleka in the Mafeteng district under the tutelage of a leadership figure in the area, not more than three years down the line that figure was attacked and killed by herders. Honourable Lekhetho Rakuoane was not able to make his speech to the finish speaking on behalf of government at the funeral of Thabiso Tšosane in the presence of His Majesty. Those who followed events in this Kingdom will sadly remember that His Majesty King Letsie III did not deliver his speech of condolences at funeral of Dr Ntsu Mokhehle because he was hackled, ridiculed and disrespected by the mourners.