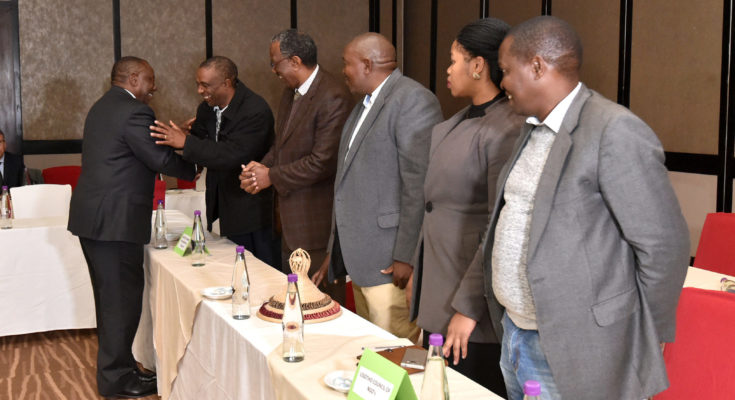 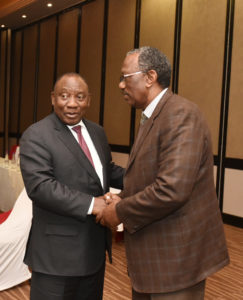 During his visit in Lesotho the SADC Facilitator also the President of the Republic of South Africa, Cde Cyril Ramaphose endorsed civil society work in the protection of reforms process in Lesotho. In his introductory remarks in his session with civil society and business in  Maseru President Ramaphosa said that as SADC Facilitation they are grateful for the role civil society has played to this day. “ Your group has consistently reminded all parties that reforms process is significant even when we are preoccupied with issues of stability you have always found way of providing a context for reforms…, your analysis of the situation in Lesotho has always been accurate, relevant and helpful…for that we thank you very much” said SADC Facilitator.

Further Ramaphosa shared with civil society that in order to protect the reforms process from political and governance challenges, agreement has been reached with political leadership that there be a post Plenary II  structure to safeguard and shepherd the process. This structure “should be legislated…” he said.  The civil society delegation made of DPE Coordinator, Executive Direct of LCN and Democracy and Human Rights Coordinator at LCN could not hold its gratitude.  This is a direct result of civil society lobby and advocacy work around reforms. For DPE this is a very resounding approval because the organisation has been at the core of civil society thinking on reforms since 2014. It is the DPE community orientation that has placed it strategically to generate ideas that civil society has used to protect reforms. 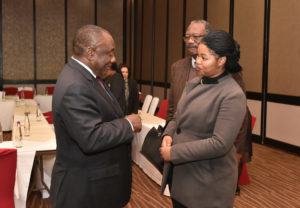 After selling the idea to civil society at the last year’s NGO week, DPE advanced to jointly hold with LCN a seminar for political parties and government on the idea of protecting reforms after dialogue through structure that should also be legislated. The proposals were accepted and since then the paper; safeguarding & Shepherding the reforms process has been used for advocacy at various platforms and fora.  Still clear in the minds of many is the moment at the National Dialogue Plenary I when the Coordinator of DPE rose on the point of order after the agenda was tabled to suggest that among issues to be discussed, there be a mechanism through which reforms shall be taken forward safely after dialogue process. Those who have been long enough in the reforms shall recall that after the New Zealand trip in 2014, DPE took the report to the people in 10 constituencies, in the run up to the brought forward elections in 2015 ran a campaign called the Government I Want emphasising that  reforms agenda should not be forgotten. Post 2015 National Assembly elections the organisation ran The Lesotho I want Campaign  in the 80 constituencies. Towards the demise of Reformist Government in 2017, DPE was part of architects of a pledge by political parties to prioritise reforms after elections. It made a significant contribution that main parties which were reluctant to sign ultimately signed. DPE was at the core of civil society organisations under the LCN leadership to wake up political leadership to the need to progress on reforms after 2017 elections, a civil society event which brought the whole Deputy President also SADC Facilitator into the country in October 2017. DPE in collaboration with LCN and other organisations mounted a rapid yet robust campaign to stop the unilateral Reforms Commission Bill in January 2018 which was not even supposed to be referred to the committees of parliament. NGOs blocked the Bill while opposition walked out of parliament thus leaving government side with latitude to do as it would have wished. Followed to the logical conclusion it shall be found that DPE has been part of core group of NGOs which did shuttle between leaders in exile and government and SADC structures efforts which yielded with formation of National Dialogue Planning Committee, coming back home of exiled leaders and eventually holding of National Dialogue Plannery I.   Beyond In-District consultations that the in which DPE participated under the LCN leadership, DPE shall hold a Community Parliament aimed at consolidating inputs from the various forgotten sectors it has brought up into a People’s Constitution for submission to NDPC. Other several groups have done wonderful job in reforms, Transformation Resource Centre, Catholic Commission for Justice and Peace to cite few.  Indeed, it is not an exaggeration that NGOs have kept reforms agenda lively. But this has come with cost, others viewed this as decampaigning their political parties, but Basotho gave NGOs in thumps up. It is against this approval that DPE has not, is not and never shall it be shaken by unfounded threats by politicians who invest on the political illiteracy of the populace.

In his welcome remarks the South Africa’s High Commissioner in Lesotho HE Sello Moloto described civil society as a dynamic and progressive group that has generated fresh and objective ideas producing discussion papers and which has demonstrated high commitment in the reforms.

It is gratifying for DPE and the entire civil society fraternity to realise that there are people who are genuine and are bold enough to appraise the work of NGOs. This comes at the time when politicians in Lesotho are determined to undermine and discredit the good of civil society. The moral degeneration that has permeated political society  has produced a caliber of politicians who are so paranoid with the sector particularly governance NGOs.  Politicians have found defaming organisations as their new trick unaware that of how corrosive such stance is in the public sphere. Instead of accepting uncritically what politicians are saying about NGOs, citizens look at why politicians are unease and make their own judgement.