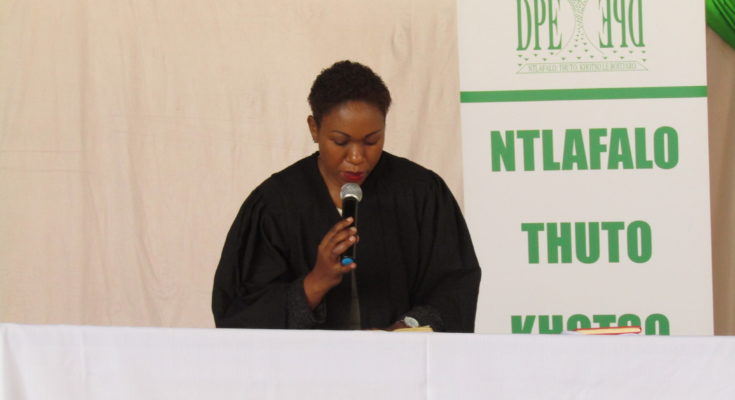 Development for Peace Education (DPE) in partnership with Participatory Initiative for Social Accountability (PISA) and Lesotho Council of NGOs (LCN) support staged the 11th National Community Parliament on the 7th and 8th November 2018 at AME hall Maseru following submission of the motions submitted to the ministries in October. Community parliament is a platform for ordinary citizens to engage with policy makers on how the national budget should look like.

The national Community Parliament also enjoyed support from the Lesotho National Council of Women, Lesotho National Federation of the Disabled and Survivors Of Lesotho Dams who also send delegations from the communities where they work. As a result of their participation, the motions presented to ministries addressed issues including the passing of a Disability Equity Bill into law; financial support for programmes that provide information, education and communication on the issue of senile dementia in elderly people; and support for youth to start their own small-businesses through financial support, training, mentoring and marketing.

Other motions tabled included those to the Ministry of Police, Water, Energy and Meteorology, Local Government and Chieftainship, Transport and Public Works, Agriculture and Food Security, Gender, Youth, Sports and Recreation, Health, Communications and Technology, Small Business, Cooperatives and Marketing, Education and Training, Social Development.  Of the twelve ministries invited nine ministries participated and responded to the motions at hand while the three that failed to attend were the ministries of Police, Local Government and Chieftainship and Public Works and Transport.

The delegates to the national Community Parliament were however disappointed and voiced their dissatisfaction that most of the ministries were represented by Principal Secretaries, Deputy Principal Secretaries and Directors rather than cabinet ministers. While the second day of the national Community Parliament coincided with a public meeting by the Prime Minister this is not sufficient explanation for the absence of ministers as even ministries invited to participate during the first day were not represented by ministers and some of the ministries such as that of Local Government and Chieftainship have deputy-ministers, but only the Ministry of Youth, Gender, Sports send a deputy minister.

Communities were not happy and they felt like they have been ignored by the policy makers as they are used to their presence in the past years. For the past 10 years successively DPE has created this platform for the communities in which it operates.  A lot has been achieved and ministers have attested to the reality that Community parliament opened their eyes as it put human face to the issues raised in this platform. Community Parliament remains one of the critical platforms of public participation for civil society in Lesotho though it has outgrown a level of being a strategic platform used by a single civil society organisation and its demand has gone beyond the capacity of a single organisation in terms of geographic coverage and other aspects.