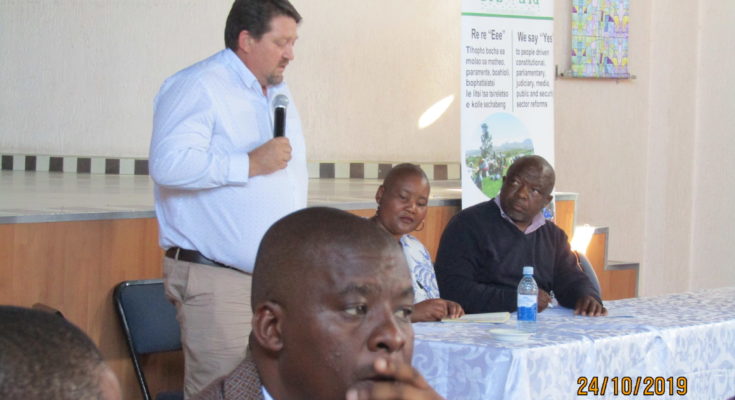 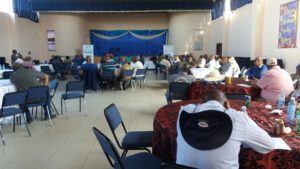 On Tuesday, the 24th October, 2018 Development for Peace Education (DPE) facilitated a dialogue session between government and the different stakeholders in the wool and mohair sector, over the provisions of the regulations on the sale of local wool and mohair products that have caused deep divisions between government and a number of stakeholders in the sector. The session was aimed at providing a platform for open dialogue and exchange of ideas with a view to reach common ground and Facilitating the identification of points of confluence and agree on how to deal with the issues where there is no agreement between the different stakeholders.

The dialogue took place a few days after the Lesotho National Wool and Mohair Growers’ Association had written to the Minister of Small Business Development, Marketing and Cooperatives to say that the association and its members will take their wool and mohair to the Thaba-Bosiu  wool center for auctioning as required by the regulations. The Association wrote the letter after legal and other measures to attempt to dissuade government from implementing the regulations have failed. Also present at the dialogue was a representative of BKB, the South African wool and mohair brokers who have been a leading player in the sector in Lesotho in the past, but has been affected by the new regulations on the sale of wool and mohair passed by the Government of Lesotho and restricting how and where producers can sell wool and mohair. 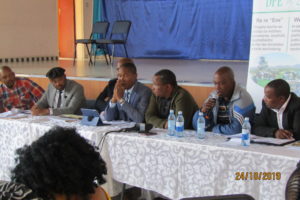 Although the Lesotho National Wool and Mohair Growers Association and other stakeholders are currently in talks with government, it was clear during the dialogue that there are still a number of issues over which growers and independent players in the sector are still unhappy.

These issues include:  Firstly concern over whether mohair damaged by rain while stored during the stand-off with government will be covered by insurance and the potential for government to compensate growers over such damage.  Secondly that the processes leading to the development of the regulations have not been participatory enough, that the regulations limit growers to only one broker therefore forcing them to forgo the benefits of competition and the principle of the highest bidder.  Lastly some farmers reported that they have already sent their product to Wool Center for auctioning but have not been paid an advance as it has been the case in the past and Farmers from Mphaki wool shed reported that wool center has not paid their two bills of wool since last year.

However, it also became clear that there are several areas of agreement between government and the different stakeholders and those include the following: Local auctioning will cut a number of costs to the producer that were associated with sale of their product That the regulations have clear benefits, including the potential for local job creation. The move gives more control to farmers over their produce and better financial benefits.  Auctioneer’s commission is capped at four percent (4%) of the sale value providing some protection against the sole auctioneer.

The outcomes of the dialogue include agreement and commitment between the minister in the Ministry of Small Business Development, Marketing and Cooperatives and BKB to meet and explore a continued role for BKB in the sector in Lesotho. Another outcome was a renewed commitment to continue in dialogue and the promise from government to seek financial support from the Lesotho Post Bank for local businesses involved in the sector. At the end of the session, a number of stakeholders asked DPE to facilitate another session as they felt a need to continue discussion on some of the issues, but also in support of the on-going discussion between them and government.