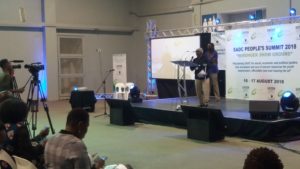 The coordinator of Survivors of Lesotho Dams Mr. Lenka Thamae gave a message of solidarity to the SADC Peoples’ Summit on behalf of the Lesotho delegation in Windhoek, Namibia on the 17th of August 2018. While delivering the solidarity message Mr. Thamae explained that Lesotho is faced with a number of including corruption; with statistics showing that Lesotho loses 1.2 billion Maloti to corruption, the violation of human rights, and weak governance. He said Lesotho is now going to undertake national reforms including of the civil service, security sector, and the Constitution. Mr. Thamae declared that Basotho will not rest until human rights are observed. 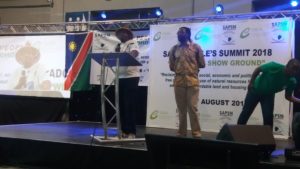 Meanwhile Development for Peace Education (DPE) collaborated with Lesotho Council of Non-governmental Organizations (LCN), Transformation Resource Center (TRC) to hold discussions where the widow of the former Lesotho Defense Force Commander Mrs. Mamphanya Mahao  give a presentation on the state of democracy, governance and human rights in Lesotho. Mrs. Mahao said that the judiciary in Lesotho takes a long time to serve justice to the people and in her case the delay has become continuous torture to her family since she has not yet been granted justice by the courts of Lesotho in her husband murder.

She said that what is more painful is the fact that the late Brigadier Bulane Sechele stood before the court confirming that he was the one who led an operation that resulted in his husband’s death no action were taken even beyond the SADC’s decision which the then government labeled as recommendations which are not necessarily mandatory. She said that however, it was encouraging that the current government gave her husband a rightful sent off that should have been done during his burial. 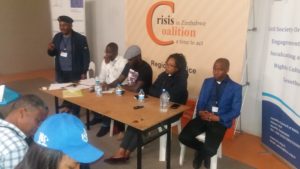 During the same session, Mr. Thaabe ‘Moso from DPE presented on the state of reforms in Lesotho saying that the issue of reforms is a work in progress. He said civil society organisations continue to monitor the process led by the government on reforms to ensure that there is clarity and proper procedures. ‘Moso further elaborated that civil society organisations have taken steps when they realized that the government was slowing the reform process and held a multi-stake holder dialogue on the reforms which was meant to discuss options for proceeding with inclusive reforms.