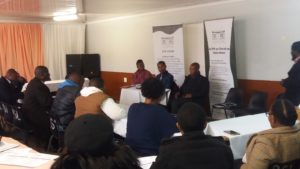 Development for Peace Education held a multi-stakeholder engagement forum with the Ministry of small business development, marketing and co-operatives, local butchery owners, small farmers and street vendors on the newly introduced policy that prohibits importation of red meat. The dialogue was prompted by an outcry from business people after the ministry introduced a policy that prohibited imports of red meat into the country. The Ministry used the Meat import control regulations of 1992 legal notice 141 to issue this directive.

As an organization that works to promote human rights, economic justice and policy dialogue, DPE saw it fitting to bring these stakeholders together to have peaceful dialogue aimed at identifying the core problems with the policy directive and find workable solutions. During the meeting, stakeholders said that they see the directive as a barrier to the growth and development of the sector and reported that the directive has had a negative impact of local business therefore they are not able to see the long-term growth of the sector that is anticipated by the Ministry.

At the heart of their complaints about the directive was their relationship with Meraka, the privately owned company running the national abattoir that is now responsible for supplying all red meat traders with red meat. The concerns include that Meraka does not have the capacity to meet the market demand for red meant both in terms of quality and quantity; and that Meraka often operates outside of its mandate as an abattoir and provider of red meat to butcheries and competes in tenders with the same butcheries it is meant to serve.  They complained that because Meraka is able to provide meat at comparatively lower prices it gets awarded the majority of tenders by ministries and other institutions.

There were also other complaints about the price at which Meraka sells to butcheries which was said to be higher that even the price at which intermediaries in the market sell and a lot higher than buying directly from South African abattoirs, including Sparta; and the quality of care and service at Meraka was also cited. Mohale’s Butchery reported that they buy a lot of cattle which are slaughtered by Meraka and that there have been numerous incidents where parts of the animals have been missing and they have been told verbally that it is because those parts were “degraded” but not allowed by the in-house veterinary at Meraka to see the said parts to satisfy themselves that they were indeed degraded. This was one of the many examples that pointed to poor relations and a loss of trust between Meraka and its clients, but there were many others discussed during the dialogue.

Mrs. ‘Mamotlatsi Selepe of One way foods and spices explained that her experience with Meraka has been unbearable and has caused her some financial losses. She explained that Meraka has priority clients who get a better services than others and for whom it reserves the best quality meat.  She said that the priority clients are also served first and sometimes other clients have to wait for more than four hours for their orders to be filled as Meraka does not deliver, unlike South African abattoirs they have used in the past which delivered their orders.

Animal traders said that Meraka imposed its own prices when buying their animals by using the weight of the animal and the quality of its meat as the basis for their price. One farmer who buys sheep and cows for resale, Mr. Thabang Thoola of ha Matala said that the minister never engaged them before introducing the policy to ensure that the policy would serve their needs and now they feel victimized by Meraka which has a monopoly in the sector.

Meanwhile Honorable Chalane Phori of the Ministry of small business development, marketing and co-operatives refuted that his ministry never engaged all relevant stakeholders before issuing the policy saying that the ministry has had several platforms where they collected views before they issued the policy. He said the aim of the policy is to empower all traders hence their prohibition of importing red meat products to promote and secure the market for Basotho red meat producers. 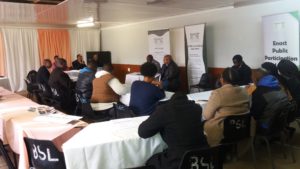 In responding to the allegations made against it, a member of the Board of Directors, Mr. Bernard Ntaote and the Managing Director Mr. Khethisa, said that their prices are low enough to enable red meat dealers to make profit and that they sell meat at market prices which are public and therefore known by everybody. They reminded the buyers that Meraka also needs to make a profit.

The member of the Board of Directors, Mr. Ntaote said Meraka was introduced to increase job opportunities for Basotho, grow the economy and Basotho businesses, buy Basotho livestock and supply meat at affordable prices thereby reviving local trade and production of red meat and its by-products. He reported that the abattoir already has plans in place for a feedlot aimed at improving the quality of local red meat. On the issue of Meraka competing for tenders with butcheries and other red meat sellers, Mr. Khethisa promised that Meraka will withdraw from tendering in competition with these businesses. He however emphasised that currently there is no law that prohibits Meraka from such competition.

In response to the minister of Small Business Development, Cooperatives and Marketing’s prodding about when Meraka will train local producers to produce other red meat by-products such as cold meats, the Director said that it is still their intention to introduce those skills into the market. On the issue of animal parts which were not released with the carcass and which the owners were not allowed to see, the Mr. Khethisa said that as a result of this he has directed the in-house veterinary to provide written reports on the status of the animal and the meat. He said that under the right conditions veterinaries should provide such reports as a standard practice. 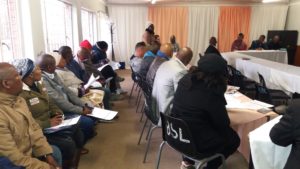 The minister of Small Business Development, Marketing and Cooperatives reported that the Association of Red Meat Sellers has not brought its complaints to the ministry. He said that both the butchery and local café business are protected for Basotho only by law and that the intention of the directive was to stimulate the red meat production and selling business and allow it to grow without competition from exports. He said that it is the intention of the ministry to build more slaughterhouses in all of the districts and to renovate what exists to the level of a commercial slaughterhouse.

The minister corrected the view held by sellers that only Meraka is allowed to import other types of meat and animals. He said that imports of grade A meat, animals and the head and feet of both cattle and sheep are permitted for all businesses. He also said that Basotho are not forced to sell their animals only to Meraka but can still sell to other individuals and businesses. He said the intervention, in the form of the directive, was also meant to formalize the trading in livestock which before was done in the streets. The minister said that the ministry recognises the need for a meat wholesale and for the formalisation of rules protecting the different types of players in the market.

Responses by the members of the Economic Cluster

Mr. Motlatsi Maqelepo MP and member of the Economic Cluster said that he has heard the same issues being discussed over the media. He expressed his interest in the legal provisions guiding the sector and identified the need for MPs to understand the totality of the laws and policies in the small business sector. He said that even after the discussion it is still not clear whether the ministry of Small Business Development, Cooperatives and Marketing had the legal standing to act as it did. He said that while he understood the need for use of protectionist measures in small economies such as Lesotho, there is still a a need for Parliament to provide oversight so that ministries do not overreach.

Ms. Tšepang Tšita-Mosena MP and also member of the Economic Cluster said she appreciated the presence of the minister and the clarification given. She said that the way forward is still not clear as there is no agreement to address the differences between Meraka and the other stakeholders on issues such as pricing. She said that the ownership of Meraka itself seems to be in contradiction with the stated objective of the ministry which is to protect the sector for Basotho owned businesses. She promised that the Economic Cluster is going to look at the specific issues raised and the laws and policies, and look into how to act to protect local business.