Development for Peace Education- DPE will lead a delegation of civil society organisations to Windhoek Namibia from the 16th to the 20th August to take part in the Southern African People’s Solidarity Network’s annual People’s Summit.

DPE coordinator Mr. Sofonea Shale says the summit will provide a platform where these organisations will table all issues that concerns Southern African people in their different sectors. The theme of the Summit for 2018 is “Reclaiming SADC for social economic and political justice, free movement and use of natural resources for youth employment, affordable land and housing for all.” The key issues that inform the theme for any year are drawn from the issues identified by organisations in the hosting country. The host for the year 2018 is Windhoek, Namibia and therefore the key issues, which mirror the concerns in other countries of the region, are as expressed by the people of Namibia. The Peoples’ Summit will take place along the sidelines of the SADC Summit which also takes place in Windhoek, Namibia in the same week. 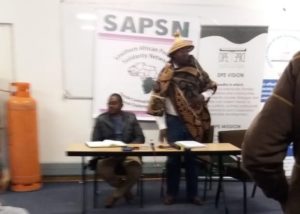 Shale said DPE has always worked to bring community issues to the national platform and hence its mandate to lead SAPSIN and be part of people’s summit.

Here’s what he said:

The last summit was hosted at held at Constitutional Hill in Johannesburg, South Africa and was hosted by the Southern African People’s Solidarity Network (SAPSN) a forum for organisations and social movements to meet parallel to the SADC Heads of State annual Summit.

SAPSN uses a pro-poor grassroots based collective action approach in linking people’s struggles against all forms of injustices, inequality and exclusion in Southern Africa

SAPSN has committed itself to helping build a region of peace and security, popular participation and democracy, human rights, and wellbeing for all.

SAPSN has a responsibility to ensure that the region is mobilized to stand in solidarity with those whose governments are undemocratic and put pressure on “outposts of tyranny” working against democratization, rule of law, and respect for human rights and Lesotho under Development for Peace Education supports and aligns itself with all democratic values and standards that promotes democracy, rule of law, human rights and values that are in keeping with a liberated continent.