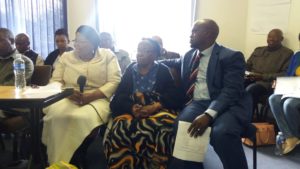 The Development for Peace Education (DPE) remembered its founder Sister. Mapaseka Veronica Phafoli on Thursday 3rd May 2018. In memory of its founder DPE had various activities planned which include the cleaning of her grave by staff, the Holy Mass led by His Grace Archbishop Dr Tlali Lerotholi O.M.I and a dialogue session to inform discussions on possibilities to write a book about her life. 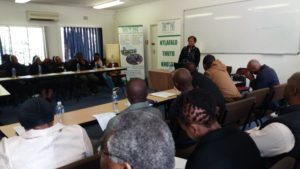 capable of thinking for themselves and if given a chance they can transform their lives holistically. “It is her thinking on education that inspired me to establish Seliba Sa Boithuto, a learning centre that gives learners the space to learn what they want at their own time.” Said Dr Mathot. Mr Lira. Theko shared that Sister taught them dialogue as the youth. The 1990 teachers’ strike was a test case where youth of Sister Veronica coordinated youth participation in the teachers’ demonstration.  Nkhono Potso Massa, senior to the founder of DPE remembered her

Dr Lineo Nketu, the main speaker addressed this topic “looking at Lesotho today what you think sister would see as what would bring peace: calm, retaining status quo, questioning the power, or what….?” She noted that Sr Phafoli was a visionary leader hence she talked about social analysis and the reflection action methodology in the ordinary communities. . Moreover she highlighted that Sr.Veronica’s ideal was to see an environment where Basotho have won their struggle to have food (Basotho ba robalang ba itsosa).She said that Sr Veronica wanted the status quo challenged by all-inclusive community voices. In response to the question she said that in the current situation like in the past Sr.Veronica could have asked the government about the grassroots involvement in decision making (public participation) and why they are still poor.

In plenary the participants agreed that it is a great idea for DPE to have literature on Sr. Mapaseka Phafoli as a role model, a visionary leader, a prophet and a hero in her own right. The consensus on the need for a book is a biggest challenge for the organisation. The dialogue session was attended by CSOs, Sisters of Holy Names, communities, Phafoli family, friends, colleagues and former Government Secretary and Minister of Foreign Affairs.