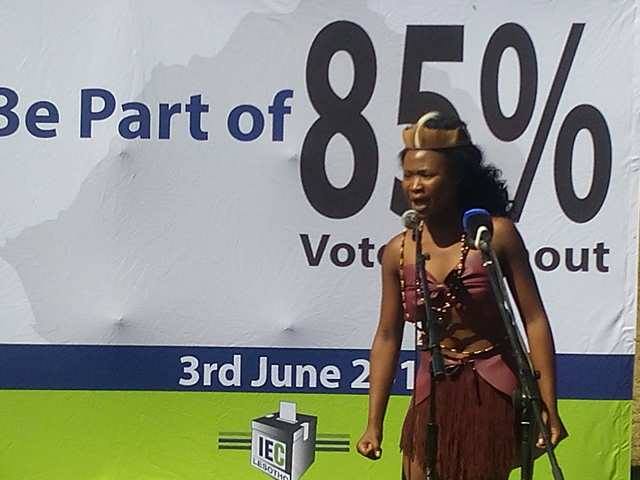 “A rising tide lifts all boats.” There is broad agreement that in economic terms as countries have gotten richer more people have been lifted out of poverty. I believe this will turn out to be true even of the current National Assembly election and other future elections in Lesotho. High voter turn-out is increasingly important to positive outcomes for all contestants.
Voter participation in elections has been declining steadily in Lesotho since 1998. In 1965 voter turn-out was 62.3 percent; in 1970 it was 81.9 percent; in 1993 it was 72.3 percent; in 1998 it was 71.8 percent; in 2002 it was 66.7 percent, in 2007 it was 49 percent; in 2012 it was 50 percent; and in 2015 it was 46 percent. There is broad agreement that political parties when in government, have generally disappointed voters by; failing to meet promises they made during campaigning, Members of Parliament failing to report back and consult with their constituencies, failing to manage political conflict that degenerated into insecurity and national conflict, a general perception of governmental corruption where those in government become richer even as the general population is becoming poorer, pay packages and benefits of politicians, (Members of Parliament and members of the executive) that are out of line with the reality of poverty and joblessness for most Basotho, poor and declining service provision and increasing economic hardships.
These broken promises and general political disappointments have been part of Lesotho’s political reality for a long time. However, during the 1980s and even into the early 2000s, with some options for employment, Basotho were able to maintain independence from their government and even mocked South Africans for their reliance on government hand-outs. However, with decreasing options for employment for most Basotho outside Lesotho and even outside of government, there is increasing expectation on government’s programmes and much closer scrutiny of government than before. There is also increased competition for the shrinking national resources that are governed by those in power. As a result many more of the people who have tasted executive power are going out on their own and establishing political parties. The result is an unprecedented twenty-eight registered political parties contesting the current election, in a country with a population of below two million citizens.
There are three different broad movements that have defined election participation and outcome in Lesotho. The first is that of a hopeful ushering-in of a new era where people are looking to the future with hope and are much more likely to participate in the process that will bring the change. This is what happened with the Basutoland Congress Party in 1993 where it was on the lips of voters all over the country and won the election decidedly by taking lead in all of then sixty five constituencies. Another movement in the opposite direction is when people are not moved by hope but by an overwhelming need to change direction. In this mood, votes can be captured by any party with the ability to present itself as an alternative. This was the mood in the 2007 election when the All Basotho Convention presented itself as alternative to what was perceived as a corrupt and uncaring Lesotho Congress for Democracy government. However, though the mood was ripe the party lost the vote because it was not able to successfully connect with rural voters. The third broad movement is what is currently happening. A large majority of voters have lost confidence in political parties. Though there are some new and tested political parties and some parties that have had limited opportunity to prove themselves in government, they are generally seen as the same political party wearing different guises and continuing the same policies that favour politicians over other citizens.
However, citizens who have decided not to vote need to consider the options. Even if they withhold their vote a government will still be elected and will rule over all citizens, including those who did not vote. One definition of voter apathy describes it as “fatigue that the electorate can experience under certain circumstances, one of which could be, in exceptional circumstances that they are required to vote too often”. This is clearly a description of the current situation in Lesotho. However, as a voters and citizens it is us who determine the kind of outcome or government our vote will produce. Yes, voters should go out in large numbers and decidedly elect one or two parties into government. However, that should not be the end of it. It is time that we who are known for placing the interests of our political party leaders over our own interests organise across political party lines in demand of more stable government; governance transparency; and public spending that favours citizens and not politicians and their supporters.
This moment, when so many have lost confidence even in their sworn political parties, is the right moment for us citizens to stand together in our own self-interest. Stand for better health services; stand for improved outcomes in primary education; stand for lower cost secondary and high school education; stand for more accountability from government in public spending; stand for reversal of decisions that have rewarded more of the public resources to politicians at the expense of all citizens; stand for inclusive and democratic process of reforms with clear deadlines for implementation; and stand in our own interests. It is in this context that DPE says to Basotho “Rise and Vote” come June 3rd and begin a new journey of being a responsible citizen.
A higher voter turnout is not only good for our democracy as explained but it can with our electoral system answer some of the concerns including the perceived exaggeration of the smaller parties in determining government.
Relebohile Senyane is a National Animator at Development for Peace Education, she oversees programmes.